What is a gas fire extinguishing system?

Carbon dioxide (Co2) gas fire extinguishing system method
It is effective in extinguishing fires. In this method due to the fact that oxygen is one
From the 3 sides of the fire triangle, try to reduce the amount by increasing carbon dioxide
Oxygen is released into the environment and eventually the fire is extinguished.

One of the weaknesses of this method is its destructive effect
He pointed to the environment, which reduces the popularity of this method and trend
Organizations are safe using fire extinguishing systems.

One of the safe fire extinguishing methods is to use clean agents, which are described below.

In the gas fire extinguishing system by clean agents, the gas
Safe substances that are not harmful to human health and the environment are used,
In this regard, it can be pointed out that these gases prevent
They have a destructive effect on the ozone layer. Gases as agents
Clean in the gas fire extinguishing system are used to three categories of noble gases or
Inert, halocarbon and tip gas are divided into 1230. Below is an introduction to each
We pay:

Fire extinguishing system of noble gases or inert gases
There are different types, each of which has a different combination depending on the type
It is composed of inert gases such as argon, carbon dioxide and nitrogen.
Inert gases take up a lot of space, and so on
The reason for their holding cylinders is larger. From another
The characteristics of this group of gases can be attributed to the long activation time
cited.

Inert gas fire extinguishing systems are of the following types:

Agents used in halocarbon fire extinguishing agents
They are clean and have no toxic properties. Holocarbon insulated against electric current
And its activation time is less than 10 seconds. This method includes the following types
Is.

It is worth mentioning that on each of these pipes and sources, different types of valves and nozzles are placed.

This is how gas fire extinguishing works
The extinguishing agent covers the whole environment and creates a high density
The so-called suffocates the fire or it can be localized so that only zinc
Use a specific area.

Inert Gas A lot more space than other gases
Occupies and then ranks carbon dioxide, FM-200 and halon respectively
The next ones are.

Materials that are used as fire extinguishers fall into 4 categories. Due to the need for speed and increase the coverage of extinguishers, two or more extinguishing elements can be used simultaneously. Naturally, each of these materials has advantages and disadvantages in extinguishing various types of fires.

The classification of these materials is as follows: 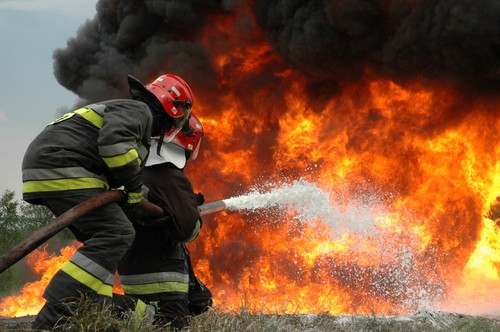 (ACoolants such as water and CO2 gas
(B Suffocating materials such as soil, sand and CO2 foam
(C Air thinners include CO2 and N2
(D Substances that limit chain reactions such as halenes and special powders

Using water to control fires is one of the simplest and most effective ways that everyone is familiar with. As much as the use of water can be useful in extinguishing a fire, it can also be dangerous in the misuse of fire and the spread of fire or damage.

The benefits of water
1- It is abundant and cheap, especially since it does not need complete purification for this purpose.
2- Expensive on the bottom and easy to transfer and flows easily in metal, rubber and tarpaulin ducts.
3- It has a high heat capacity, which makes it a desirable coolant. The heat capacity of water is 5 times that of aluminum and 10 times that of zinc and copper. More importantly, the latent heat of evaporation of water is very high and absorbs a lot of heat during evaporation.
4- It is non-degradable by heat, it does not decompose even at high temperatures. At 2,000 degrees Celsius, only one-tenth of its molecules decompose.
5- It has a high cooling capacity so that in equal volume, it is 6.5 times cooler than CO2. Each liter of water can absorb about 550 kcal of heat during evaporation, and each cubic meter of water absorbs about 10,000 kcal of heat to increase the temperature by 10 degrees Celsius.

Disadvantages of water
1) It is heavy, so it is difficult to transport in mobile extinguishing.
2) is a conductor of electricity, in places where there is electricity, increases the risk of electric shock.
3) Water has a risk of destruction, when water is sprayed under pressure, it has a high destructive power, which is sometimes not less than the fire itself.
4) When extinguishing a fire, materials and products are damaged by mixing with water. Such as medicines, furniture, packaging cartons, paints and manufactured products.
5) Due to the increase in the volume of water when evaporating when spraying on flammable liquids such as oil or oil, it causes the liquids to be thrown, exploded and sprayed, causing the fire to spread.
6) Due to the surface tension of water, its penetration into the material piles (coal piles, sawdust and the like) is limited.

The foam is prepared as a solution. When sprayed, the foam is mixed with air and water by the head of the foam pipe and bubbles. 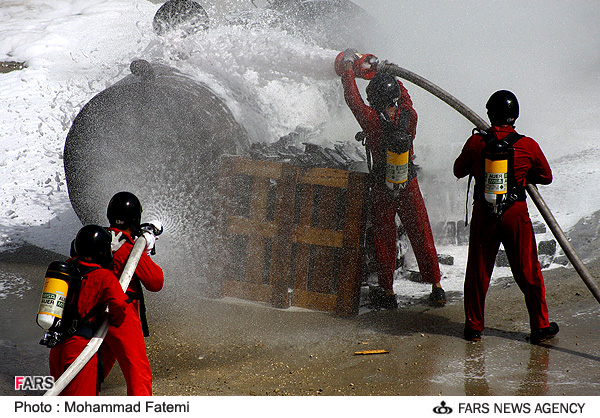 The important point in using the floor is its good development and spreading on the surface of combustible material, especially flammable liquids due to its lightness.

Using some chemicals, which are usually based on carbonate, sulfate or phosphate, is a common and simple way to put out a fire by suffocating it. These compounds are easily used to extinguish groups C, B, A fire. For this reason, in general use, this extinguishing compound is usually recommended. These compounds are called chemical powders. Although chemical powder is used for Class A fires, it is not recommended for economic reasons unless flammable materials are expensive or the use of water changes their nature.

This powder is sprayed on the fire to cover the fire and prevent oxygen from reaching it.
Powders do not have good stability at temperatures above 60 degrees Celsius and the possibility of their adhesion in the capsule increases. The diameter of the powder grains, depending on the type of material and the manufacturer, is about 10-75 microns. The smaller the particle diameter, the more effective the powder. The chemical powder under the pressure of nitrogen or CO2 is sprayed on the surface of the fire base and if the people are well trained, they can easily put out the fire.

This powder is used to extinguish fires of flammable metals such as sodium, potassium, magnesium and the like.

Carbon dioxide is a non-combustible, odorless, non-toxic, and heavier-than-air gas that has a density of 1.5 and is not an electrical conductor. The mechanism of action during a fire is three ways: first, to suffocate the fire by forming a heavy layer resistant to the passage of air, second, to dilute the oxygen in the air around the fire area, and third, to cool the fire.
One of the important properties of CO2 gas is that it does not cause damage to materials in the fire environment, so in cases where valuable materials catch fire, it is more suitable than water. CO2 is very suitable for electric fires because of lack of electrical conduction and lack of materials The residue does not cause binding or damage to sensitive materials.

Hallen can play a very effective role in extinguishing without leaving destructive and residual effects on materials and devices. The mechanism of action of halen is somewhat similar to that of CO2, and because they are heavier than air, they can quickly cover the fire and prevent oxygen from reaching it. In addition, spraying these materials on the fire can dilute and inhibit oxygen in the air around the fire. These materials weigh 2 to 3 times as much CO2 as their extinguishing power.

Hallen can slow down chain reactions when exposed to fire and more effectively contain fire, so under the same conditions for extinguishing a fire, the amount of halen required is less than a quarter of the amount of CO2 required to extinguish. Hallen is widely used for small but important areas of flammable equipment or materials such as electronics and electrical machines, high solids fires, dispatching sites, telecommunication centers and the like.